So my poor P1800 has sat mostly unloved and alone in the garage for the past few months while I've been consumed with a project at work that has taken all of my evenings and many of my weekends. That project is winding down - in fact it goes public on Thursday and might even make the front page of my companies webpage. I'll post it here if it does.

The P1800 continues to start run well after the advice I got from 142Guy and Ron Kwas in my other thread. I start the car from time to time and even took it out on a drive the weekend before last to shake it down a bit. I noticed some odd noises coming from the front while braking (a single 'clack' upon pressing the pedal) so I decided to give the brakes a good once-over. I took the pads out of the front drivers side and then couldn't get them back in. I bought a cailiper spreader tool and actually bent the tool trying to get the pistons back in. After extending them fully I realized the 2 smaller ones retract freely, but the large one does not retract at all. So I bought a rebuild kit and intended to do both front calipers. That's where I got stuck.

It turns out my brake lines are rusted. Like rusted, rusted. I've used PB blaster over the course of a few days and I can't crack them with 5-point wrenches or vice grips, and the more I try, the more I fear I'm damaging the nut. I can't separate the metal line from the caliper, or from the rubber line, either of which would allow me to remove the caliper from the car.

So my plan now is to get a decent flaring tool, cut the 3/16" metal line, remove and rebuild the caliper, then rejoin them. Is there any other way to get the caliper out I'm overlooking?
C

Joined Jan 7, 2013
·
377 Posts
Apply some heat to crack the lines. Propane torch worked for me. Best to replace the lines rather than patch them. You can use cupronickel rather than steel, much easier to work with , that’s cupronickel, also known as kunifer, not 100% copper. Fittings are available, generally not too hard to find. The flares are double, so you need the proper flaring tool. I used this one, had to wait for delivery from UK, but worth it. The tool I bought local was no good.

I was actually thinking that once the caliper is out (via cutting the line) I might be able to get better leverage and get the nut out (on both ends). Although I also fear that by trying harder, I end up breaking off the fitting in the caliper.

Thanks for the suggestions!

Joined Oct 25, 2017
·
56 Posts
Ok, so an update. I did some googling and found a video of a guy who rebuilt his calipers while leaving them on the car, so I decided give that a try, and change out the lines if they got damaged. I built a little wooden shelf at the perfect height to rest it on, and it worked pretty good. Was able to get the calipers apart, inspected, cleaned and eventually rebuilt.

The bad news was that the larger of the 3 pistons was corroded. 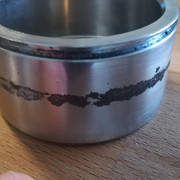 So I ordered new ones. Then the guy emailed the next day and said they were out of stock and canceled the order. Then the next place I ordered them from did the same. Then I started calling places and all the estimates I got were in months. Then I recalled that Jags of the same vintage used the same stock of parts, and with measurements in hand, I ordered some pistons for an e-Type. Wouldn't you know, exactly the same dimensions. Except thicker walls and made of stainless steel. 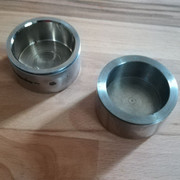 So, all back together and system bled and it's working well.

Spending so much time under the front wheel arches, I got tired of looking at the rusty shocks in there. I figured a new set was under $100 and would be a good idea to do as long as I'm at it. I looked at the design of how they go in, figured its 30-60 mins per side, max. That is unless you're dealing with 50 year old rusty bolts. I snapped two of them out, which meant taking apart a lot more car than I'd wanted to, dremmelling off the old nuts, welding on new ones and finally getting it all back together. So it ended up being a day and a half rather than a couple hours.

Then I took it out for a drive. All runs well, but now having some issues accelerating when warm, which I'll post in a new thread.