Joined Aug 11, 2012
·
5 Posts
Recently bought a Volvo 245 SE.... Long story short Cambelt snapped on the way home from getting it bought a Cambelt kit with belt and tensioner fitted the kit and timed the car up twice now just to make sure the three marks on the belt line up properly but still no start.

So far I've checked.....
Cylinder 1 is definitely at TDC on the crank pulley and the crank gear is timed as well
Both valves are closed on cylinder 1 at TDC on the cam pulley mark
Intermediate pulley lines up with the marks and also the dizzy is pointing directly at cylinder 1

I have checked fuses all fine

Anymore information would be awesome really just want to get the wagon running thanks guys and girls!
N

Joined Aug 11, 2012
·
5 Posts
Some more information it's a uk vehicle K reg the engine is a b200f I believe it's running a Bosch injection system if you need anymore information to help me please feel free to just ask thanks again!
G

When you set the ignition timing how much was it "off" and which direction?

Just moved this to the 240 Forum - would you confirm that engine designation?

The engine is definitely a b200f and the injection system is Bosch lh2.4.

Im guessing by timing you mean the belt which is to the zero mark on the crankshaft pulley and on the mark on cam and intermediate.

I tried loosening the bolt behind the distributor but I could get it to rotate so I'm not sure how you change the advance or even if I can...

Thanks for the replies dill

Joined Aug 11, 2012
·
5 Posts
Ok so I've been out and tore down the Cambelt and re-aligned it.
Got a couple of videos if anyone could check these out and tell me if it's all true and ready for putting back together!.

And this is the distributor to show you the ignition advance....
http://www.youtube.com/watch?v=OTYOn...e_gdata_player

Methinks you may need to check the engine for internal damage.

The exhaust manifold studs are badly corroded I'm not sure I will be able to remove them.

Thanks for the help dill
Cheers,
Josh
J

Joined Mar 15, 2008
·
3,126 Posts
Don't give up on the old girl yet. You have LH-2.4, which should mean that you have a crank sensor mounted on the gearbox bell housing and a flywheel which acts the same as a trigger wheel [58 holes(automatic)/teeth (manual) with two blank]. Go to K-Jet here: http://www.k-jet.org/ and read through the Green Book links for 2** series engines. Somewhere in them you will find how to diagnose/replace the crank sensor and related items. As for your belt and ignition settings, they still may be 180* out of sync, and the procedure to get correct settings should be somewhere in K-Jet. I'll get you some photos for you of where the blanks should be with #1 at TDC on the compression stroke. Gotta go now.

OK, back again, so let's do a bit of a summary here. You have a B200 which is similar to a B230; you have the LH-2.4 EFI, which means that you should also have an EZ-116K ignition system and also an OB1 diagnostic system with the code reader box located on the rear side of the left front strut housing. You installed a new timing belt with #1 cylinder at top dead centre on the compression stroke with the all marks on the belt and the crank, intermediate and cam sprockets all lined up, including after you have released the idler and put tension on the belt, and the distributor rotor points to the thermostat housing. You also have good spark at the plugs and fuel in the rails, but you don't know what fuel pressure you're getting, and I'm assuming that the starter runs and engages and the engine turns over.

So, easy, or somewhat easy, tests first. If you have or can borrow/rent/ a fuel pressure tester, check for fuel pressure and volume using the procedure in the K-Jet manual, or (but not as accurate) you could pull the fuel rail with the injectors attached, and with the pumps running check to see if you get a good spray. Next would be to test the crank sensor at the connector on the engine side right side firewall, again using the K-Jet manual. Finally, do an engine compression test to see if it's OK, again as noted in K-Jet, and check the ignition wires and plugs for condition.

Here's a photo that shows the crank sensor mounted at the top of the engine where it's bracket mates to the bell housing. And I was wrong about the manual flywheel as it doesn't have teeth for the crank sensor but holes in the flywheel.


If all these fail then it's back to the timing belt installation. With everything installed you're gonna have to pull the starter, which is a bit of a bugger, and with the engine at TDC #1 on the compression stroke, you should see the two blanks on the flywheel (flyplate for automatics) at the bottom of the starter hole as shown below. 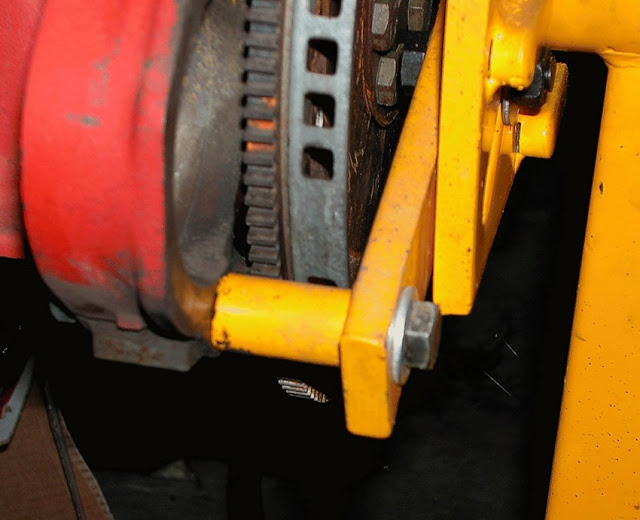 If you don't see the blanks, and if you haven't removed and then misaligned the flywheel/flyplate on re-installation, then there's something wrong with the installation of the new timing belt, which I believe would be that the cam position.

That's about it for now, and no, I don't know why some photos are doubles.
J

It came from here: http://www.volvoclub.org.uk/faq/FAQSummary1.html