Joined Nov 12, 2017
·
127 Posts
So, my car cranks great and runs great. It runs better than all of the cars that I owned in the 80s.
But.... after it runs for about 25 minutes, it starts to stumble. I watched the guages pretty well and it starts once the oil temp reaches about 200. 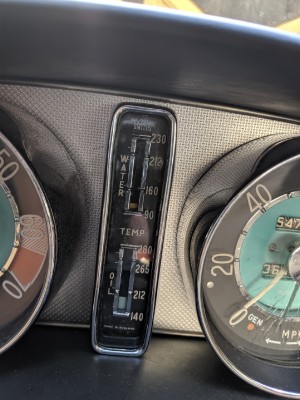 Under the guidance of Ron on another post (thank you Ron), I ran it on flats and then up hills to see if the RPMs reached changed. It did. It is very rpm dependent. This proved that it was a fuel delivery system issue instead of a possible issue with the electrical system not providing enough spark, fast enough spark at these rpms - because if it were the electrical, the higher rpm failure would be load indepent (not change when going up a hill).

So - that is where I am now. I need further help.
Here is a video of the carbs - with a light shining in to see the fuel (or lack thereof). Well nevermind... The video apparently stopped after 5 seconds!!!! AARRGH.

Anyway, the car was well heated when I was home and would not exceed 5500 rpms parked in neutral. I could see the gas atomizing in both carbs.. At 5500 rpms, the gas would sputter - sporadically not feeding the gas. This was happening in both carbs.

So - what the heck do you pros think this could be? If I put on my engineering hat, I think of what may be temperature-dependent and all I can think of is the fuel lines. Perhaps they are getting mushy, closing on themselves, or kinking into a 90 when hot. I wouldn't think so - but that is all that I can come up with?

Before I go willy nilly replacing the lines, what should I do next? What might this be? There is not a lot left!

I have tried to be pretty clear on this post for future readers who may have similar issues.
W

Joined Apr 11, 2005
·
59 Posts
I wonder if the car might be running rich, the opposite of what you've suspected. As the engine is cold and warming up, a rich mixture can be fine. But once hot, a rich mixture can cause rough running. Is the tailpipe sooty black or gray?

Also, did the car exhibit symptoms before you rebuilt the carbs, replaced the fuel pump, replaced the tank, and replaced the filter? If not, any one of these could in fact be the problem. Just because a part is new doesn't mean it's not defective. With an older car, aftermarket parts can be unreliable and OEM parts can be aged.

Finally, I'm not sure you can eliminate electrical problems just because the symptom is load dependent. A weak or inconsistent spark can have a different effect depending on load-dependent variables like fuel mixture, mixture quantity, pressure, heat, etc.
R

Thanks for your confidence, and kind words, but I prefer not to accept any praise until this issue is sorted...

"electrical system not providing enough spark, fast enough spark at these rpms" (nik-pick, but I must!)...it's the IGNITION SYS (supplied with low voltage by the elec sys) which provides spark, and it is pretty unlikely to be Temp dependent, and it also should not be running out of the ability to keep up (in speed) at 4kRPM, unless it has issues (check dwell angle to be in a reasonable range).

A load dependent misfire can typically and most-often be traced back to a fuel feed (or mixture/Carb adjustment) issue, but know that the spark does have to jump through the compressed Air/Fuel charge to ignite it, so if weak (due to low energy or low Spark voltage), it may have difficulty with this at high loads/RPMs, and misfires result.

I'd do a preventative service on the Distributor/Ign Sys at this time, to see if symptoms changed at all...

...and now that I think of it, change that Ign Condensor while there...current china-**** products (even under Bosch labeling) have been known to have problems with strnge symptoms...

Joined Nov 12, 2017
·
127 Posts
Thanks everyone.
I used to work on cars all the time, it has been a while. Sorry for the "electrical / ignition" faux pas. hehe. My brain is leaked a little information out over the years.

When I replace the gas lines, I will update you all on the status.

As far as running rich - that is not the issue. I have checked that. Also, the condenser has been replaced recently, but I will go there next after the gas lines if it is still acting up. I really need to get rid of the rubber hose from the tank to the fuel pump anyway.

Have a great day - and Thank you!
W

Joined Apr 11, 2005
·
59 Posts
I absolutely agree with looking at the condenser! In the last ten years I've had more bad condensers than I could shake a stick at. They used to never go bad. I think the problematic Bosch ones were made in Turkey. Yes, very bad running under heat and load. Find a NOS one if you can!
V

Joined Dec 20, 2012
·
249 Posts
I'm with Ron and Weilerbach - what you describe sounds more like a condensor, or possibly coil, issue than a fuel system fault.